“We Always Go to the Same Place,”

…I said to Chuck. “This time I want to try something new.”

We were headed to Breaux Bridge for the day, and when there, we have always eaten at the same nationally known (actually internationally known) café. And while I have no problem with their food, I wanted to branch out. A Google search brought me to the website for Buck & Johnny’s with food described as “eclectic” and “Italian.” And, as a bonus, the restaurant was located in a restored building. 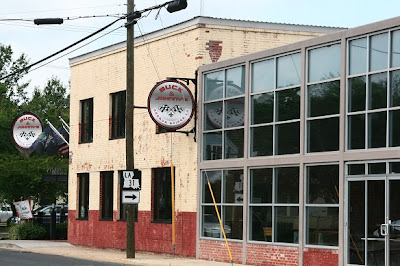 “Buck & Johnny's…opened in the Downtown Breaux Bridge Historical District in 2010. Located in the old Domingues Motors building that stayed abandoned for decades, local businessman David Buck purchased the building with the vision of restoring it as a multi-use restaurant, shopping, and event space. David partnered with his good friend Johnny Raymond to create Buck & Johnny's,…an Italian restaurant with a unique atmosphere where diners can enjoy pizza, pasta, and other specialty dishes prepared with local ingredients. The ambiance of the old Domigues Motors building has been maintained through oil can light fixtures and 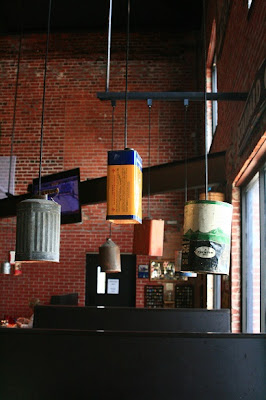 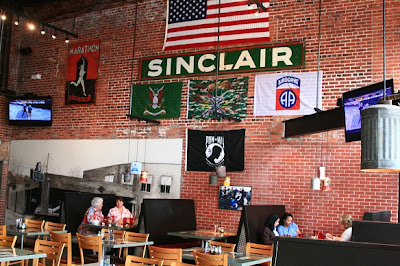 The addition of a loft, a balcony and a patio adds to the homey atmosphere for a family night out, a special occasion or a romantic dinner for two” (lafayette.backpage.com). 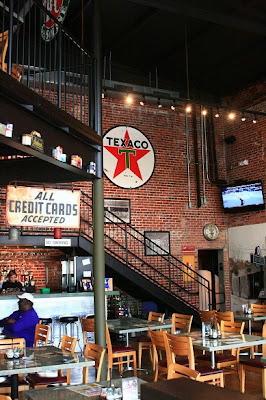 We were enchanted as soon as we walked through the doors. The brick walls look to have been sand-blasted to bring out their warm red tones and are decorated with the tin signs referred to in the above paragraph. 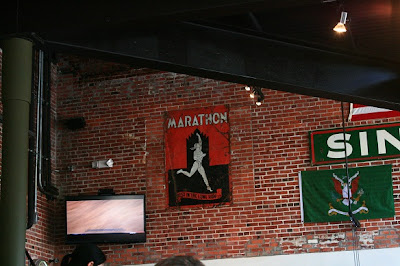 Hanging over the small bar and the booths are the oil can chandeliers. 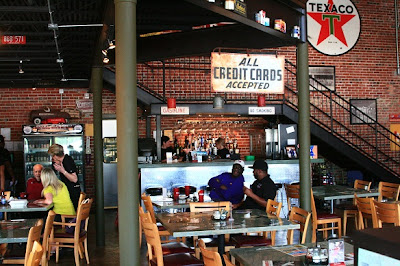 We so appreciate people who preserve the old by bringing it into contemporary use, and here it has been done exceptionally well.

And just inside the doors is a gallery of “art” that had been colored by local children. 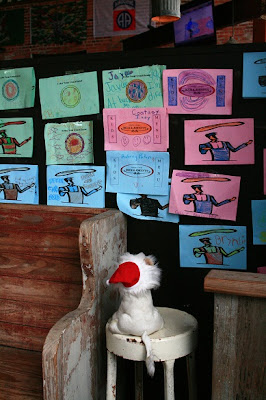 The menu offers an impressive selection of appetizers along with salads, pastas, entrees, and sandwiches. But, after our unfortunate experience with pizza in Galveston, we were feeling pizza deprived and concentrated on the pizza portion of the menu. Our choices? No surprise here. One Margherita and one basic cheese and sausage.

So we are sitting at our table by a window and looking out at the restaurant’s small patio when we were approached by a dynamo in human form. This proved to be Coatney Raymond, wife and business partner of Johnny and the restaurant’s manager. “Is this your first time here?” she asked. “How did you find us?” “Where are you from?” 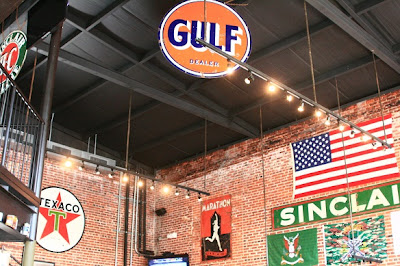 To the latter question Chuck said that there are two answers to that question--the straight answer and the wisea__ answer. “Lay it on me. I was a nurse for over forty years and can handle anything.” Coatney had been the Director of Surgical Services at Our Lady of Lourdes Regional Medical Center until her retirement a few years ago and was then pressed into service to “whip” the restaurant into shape.

“What did you order?” she asked. When we replied “Pizza” a look of dismay crossed her face. Coatney had hoped that we were going to get a more complete picture of what their kitchen can do.

Well, when it came to pizza the kitchen did very well indeed. The Magherita included a garlic-accented olive oil base, chunks of sweet and flavorful tomatoes, basil that thankfully had been added when the pie was removed from the oven (no shriveled dry bits here), and fresh mozzarella. 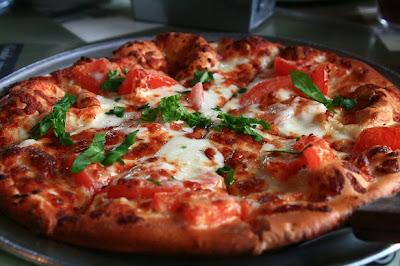 And all of this sitting on a thin and crisp—but not cracker-like—crust. The edges of the crust had been brushed with oil so that they became extra crunchy.

The sausage pizza was equally good and came on the same style crust. The red pizza sauce (they also offer pesto, garlic herb oil, BBQ, and roasted garlic cream) did not have that sweet cloying flavor that you find in too many restaurants serving pizza and had just a hint of the natural sugar and acid that you find in tomatoes. And the mildly fennel sausage was a perfect pairing with this sauce. 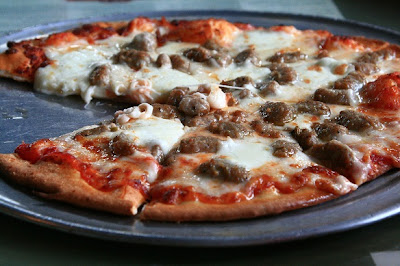 There is an extensive list of “design your own pizza” offerings and a list of specialty pizzas. But both of us—pizza purists that we are—are always content to stick with the basics.

“Did you order our bread pudding?” Coatney asks from an adjoining table. To our reply in the negative, she says she is going to send us over a serving. “Eat it and tell me this is not the best bread pudding you’ve ever eaten.” One bite and My Favorite Traveling Companion looks over at me and goes, “Oh, my.” I can only echo that. 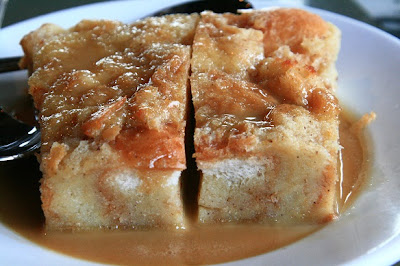 This was the lightest bread pudding ever and not like a heavy brick of soaked bread. It wasn’t overly sweet. It didn’t contain too much cinnamon. And the rum sauce didn’t overpower. Yes, Coatney. This is the best bread pudding we’ve ever eaten.

And the bread pudding is the dessert that they make in house (the others come from Poupart’s Bakery in Lafayette) and Coatney gave the credit to their chef Tony (I think I have his first name right.) Savoy (pronounced 'sah-vwah'), who was brought in to “whip the kitchen into shape.” His plan was to only stay for three or four months, but liked working at Buck & Johnny’s so much that he stayed and now has been given a piece of the business.

“You need to come back and try some of the more interesting items on the menu,” Coatney said as we were preparing to leave. “We’ll show you what makes us a hidden gem.” And tomorrow we’ll tell you about that lunch.
Posted by The Wanderers at 6:10 PM