O.K., so I stole this title from the Travel Channel. Do you think it is easy being creative all the time?

If you travel north from our campground on I-17 (or “The 17” as they say in these parts) about seventeen miles, you’ll come to the Black Canyon City off-ramp. At the top of the ramp, turn left and drive over The 17. Soon you will have to make a choice. Turn right and you are in Black Canyon City. Turn left and you arrive at Rock Springs Café, home of the greatest – as Paula Deen would say – “pah.” We have eaten many a meal at Rock Springs Café, but the meal is just an excuse for dessert.

This was one of our first stops during this Phoenix sojourn, and we shared (not pictured) the cheese crisp with the works and an order of wings. As usual, the food was nothing special. Then came dessert. Pie. I have a theory about cream pies. You eat them on the day they were made. 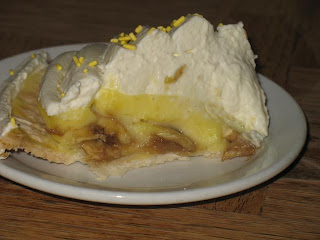 After then the filling becomes funky. So we have never bought and taken home a cream pie. (Not that we couldn’t probably consume it in a day.)

But we were eating the pie at the café, so both of us chose creams. The banana cream (above) for Chuck and the coconut cream (below) for me. 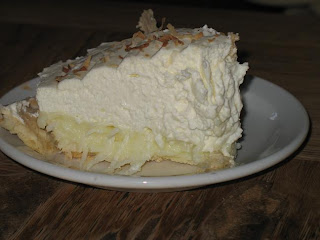 Both were covered with a thick topping that was neither whipped cream nor meringue and both were thick with bananas or coconut. And the crust was rich and flaky. Perfect pie (“pah” as Paula would say).

But one day we made a rash move. Instead of turning left toward Rock Springs Café, we turned right and headed to Black Canyon City. There, next to Granny’s Thrift and across the road for Ron’s IGA Market, sat Byler’s Amish Kitchen. John and Gerry Byler grew up Amish in Ohio, but after leaving the sect, moved to Arizona in 1969 and opened their first restaurant. In the mid-80’s they moved to Black Canyon City and continued in the restaurant business. When they retired in 2001, their daughter took over and renamed it Byler’s Amish Kitchen to honor her parent’s heritage. 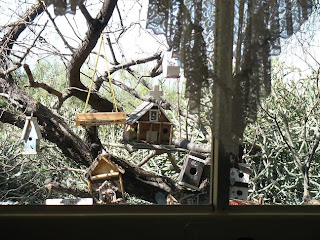 The restaurant is known for its American comfort food and its homemade pies. (We didn't know if it was also known for the birdhouses just outside one of the dining room windows.) Is this a worthy contender for Rock Springs Café? We’ll find out.

Strictly speaking, this is not an Amish restaurant. Or, at least, not as compared to the Amish restaurants we have eaten at in Lancaster, PA, or the Amana Colonies in Iowa. Dining is not family style where whole bowls of potatoes, vegetables, and salads are placed on the table. 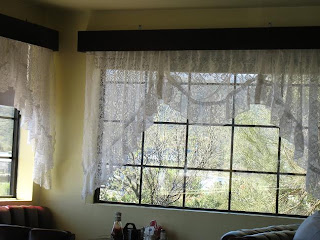 Nor does there appear to be any sign of the “seven sweets and seven sours” that you find in Pennsylvania Dutch food. To me, this is all to the good.

The lace curtains on the windows and the mural with its scenes depicting a barn raising,

horses and buggies, and farm scenes that covers the wall between the ceiling and windows are perhaps the biggest homage to the Amish culture. 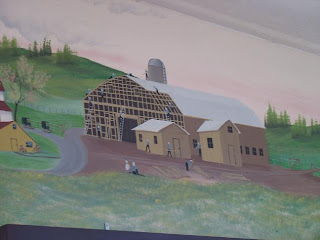 Chuck’s lunch choice was the open-face meatloaf sandwich with mashed potatoes and gravy. This was a large portion of very good (but mine is better) moist meatloaf. 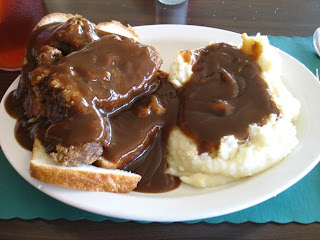 The side of homemade mashed potatoes (supplemented with an extra scoop for Mr. Potato) was covered, as was the meatloaf, with beef gravy to die for. This was superior gravy. Savory but not overly salty, it had an extremely rich and intense flavor. The gravy alone elevated this to meatloaf nirvana.

I chose the shaved rib eye sandwich with sautéed mushrooms, onions, peppers, and Swiss cheese on a soft long roll. 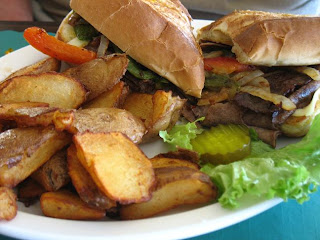 This cheesesteak “wanna be” wouldn’t fool a Philadelphian but was still a very satisfying sandwich. It came with a side of what the menu called “potato skins,” so we expected to get a few of the appetizer pieces where the potato meat has been scooped from the skin. (Is this the way restaurants make money? By finding a way to get us to order the peelings that would normally be thrown away?) Instead, the skins were a cross between a potato skin and a steak fry wedge. I couldn’t tell if they had been fried or roasted/broiled, but they were delicious. There were so many that Chuck ate some dipped in his meatloaf gravy.

We agreed that Byler’s food was better than Rock Springs’. Not dramatically better, but better nonetheless. It all came down to the pie – a slice of the blueberry crumb. 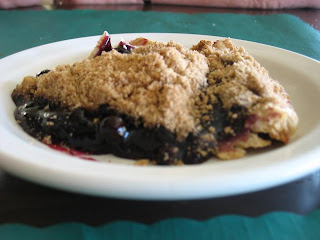 So who won? Byler’s food edges out Rock Springs, but Rock Springs wins the pie (pah) war hands down. The recommended game plan is: eat lunch or dinner at Byler’s Amish Kitchen and then drive down the road to have dessert at Rock Springs Café.