What's in a Name?

The name Montezuma Castle was a mistaken name.

Nevertheless, on December 8, 1906, President Theodore Roosevelt celebrated the passage of the Antiquities Act by declaring four sites of historic and cultural significance as our nation's first National Monuments. Among these was Montezuma Castle, which the President identified as a place "of the greatest ethnological value and scientific interest." 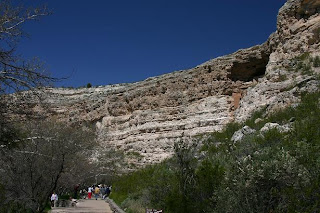 The prehistoric cliff house (right in the photo on the right) has been misunderstood since the 1860s, when the first groups of miners and soldiers visited the area and misnamed it after the Aztec emperor, Montezuma. 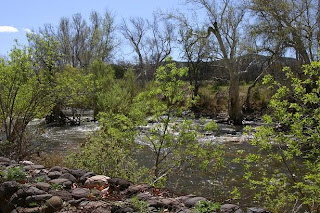 Interestingly, the Sinaqua ruins had been abandoned a hundred years before Montezuma was even born. And the dwellings weren’t a castle at all, but a multi-family “prehistoric high rise apartment complex”. 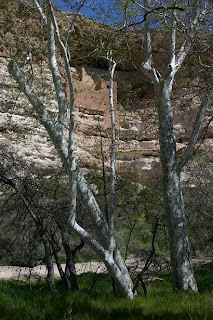 We visited this dwelling, located 50 miles south of Flagstaff and less than five miles from our RV in Camp Verde. The setting was serene with the faint sounds of Beaver Creek accompanying our walk past the white-barked Arizona sycamore. 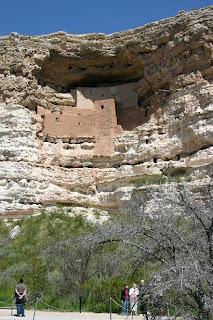 But our attention quickly turned to the work of the Sinagua Indians--the cliff dwelling known as Montezuma Castle, built in the early 1300s.

The Sinaqua were clearly daring builders, having scaled the high cliffs to carve out a recessed area into the limestone walls to erect these strongly-built dwellings. 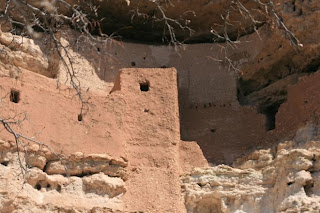 The Sinaqua used ladders to climb to the Castle, and as they reached each level, the ladders were pulled up to the cliff community, making it difficult for enemy tribes to penetrate the natural defense of straight-vertical barriers.

Up until 1951 visitors climbed a series of three ladders to enter the dwelling at Montezuma Castle National Monument. However, concerns for both visitors' safety and the Castle's structure (which is 90% original) led to the removal of the ladders in 1951. 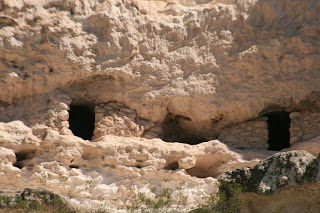 The prehistoric Hohokam Indians had been here hundreds of years previously and had built irrigation systems for farming that proved equally as valuable to the Sinaquas.

And for unknown reasons, the Sinaqua abandoned their habitat in the Verde Valley of Arizona in the 1400s. Maybe they had over extended agricultural pressure on the land. Perhaps there was a lengthy drought, or they could have been eliminated through conflicts. 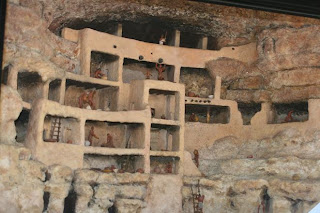 This model of the Castle shows some of the 20 rooms in the five-story cliff dwelling that sits in a recessed area of the cliffs 100 feet above the valley floor.

A video presentation in the Visitors' Center shows the view from the fifth floor and the functions of spaces--living areas, work areas, and storage areas.

Less than 10 miles from the Castle is Montezuma Well. This funnel-shaped 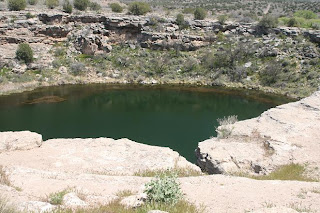 limestone sink was created by the collapse of a large underground cavern. The pool of water is 55 feet deep and 368 feet across.

There are also ruins located here from large pueblos to one-room houses. 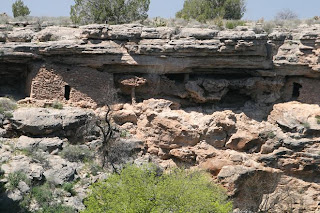 The early inhabitants of Montezuma Well took advantage of the overhanging cliffs, using them as roofs and walls of their living areas. Cliff houses faced east to benefit from the morning sun, and the Sinagua Indians used ladders to move between levels. 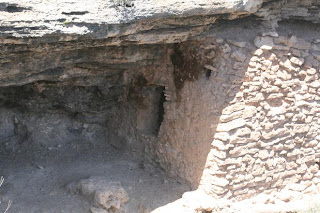 Subterranean springs of warm water replenish the well with over a million and a half gallons of water a day--an amount unvarying, apparently, since prehistoric times. 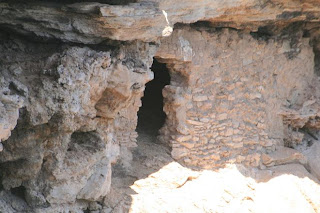 Water from the Well flows through cracks in the limestone, traveling about 150 feet, and emerging in an outlet which prehistoric farmers channeled into a canal to irrigate their crops.

We were unable to get any closer to the outlet into the river than this, but a Park Ranger pointed out the oldest 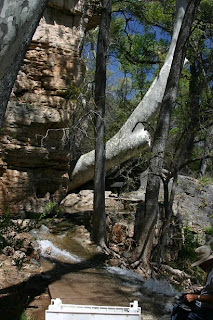 Arizona sycamore (left and below) in the state.

He also passed along this story: After one of his talks by the outlet into the river, one Cub Scout asked, "Why happened to all the people?"

The Ranger answered, "The story is told that Mother Nature became angry with the people and sent a Dragon that either ate the people or scared them away." 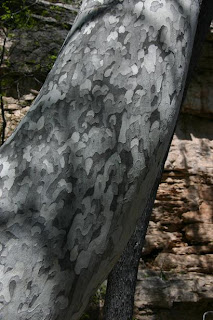 Well, it seems that algae builds up in the 150-foot channel to the outlet and at a certain point the pressure behind the algae build-up is sufficient to "blow" the algae out accompanied by a booming sound.

Just as the Ranger finished the story about the role of the Dragon, the pressure of the water blew out the algae.

Before the boom and the increased burst of water had subsided, the Cub Scouts had scattered back up the trail, not daring to look back to see if the Dragon was gaining.
Posted by The Wanderers at 7:31 PM