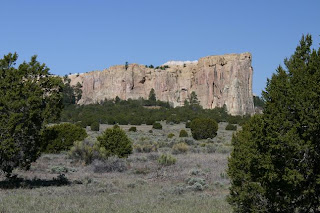 The massive sandstone bluff, which stands out from the surrounding desert landscape, was known to Spaniards as "El Morro," or "the headland" or "the bluff." 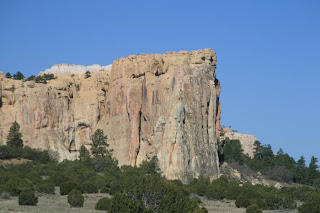 To the Zuni Indians, descendants of the puebloan Indians who lived here, it was known as "place of writings on the rock." 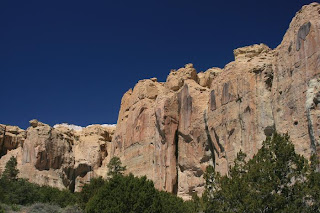 From this position, we could see a portion of the more than 700-year-old pueblo called Atsinna. The white bricks (left in the photo on the right) are a portion of the pueblo that can be reached by the Mesa Top Trail. 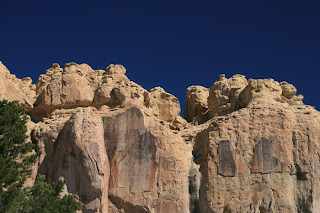 To Anglo-Americans, it was called Inscription Rock. Over the centuries, travelers stopped under these cliffs.

They left carved evidence of their passage. Their presence 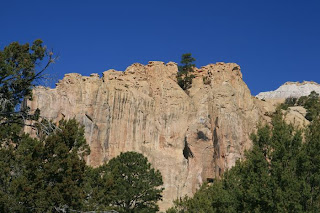 here has been recorded in some 2000 of their symbols, names, dates, and fragments of stories inscribed in the rock. 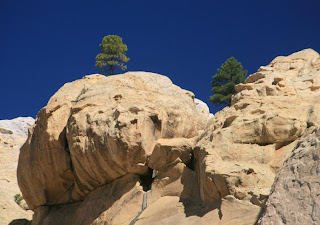 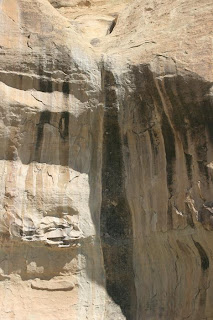 The reason that the peublo could establish an agricultural community and the reason that travelers stopped to note their passage is evident in the black stripes on El Morro. These stripes are actually spillways where water from the bluff's top funnels into the pool below. 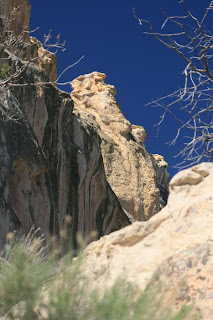 Rainfall in July, August, and September and the melting snows of winter feeds the pool. It is not a spring. 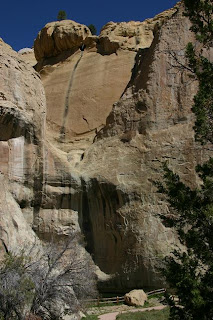 In the lower portion of the photo (right), a fence marks the location of the life-sustaining water. It may seem small in the shadow of the rock, but this pool was the only source of water for 35 miles in any direction. 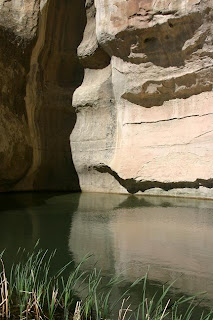 It is no wonder travelers would linger at this spot with its abundant supply of water to record their passage through the area. 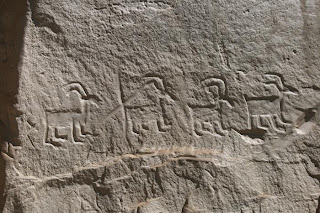 Petroglyphs were the first markers of people living on the mesa. The bighorn sheep are still clearly visible centuries after the recorder had pecked their images into the stone with an animal antler or a harder rock called a hammerstone. 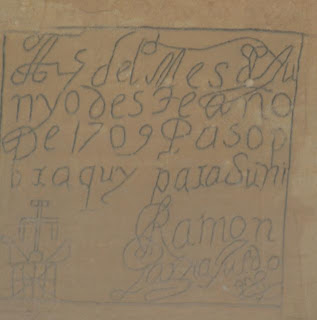 Spaniards were believed to have used daggers or horseshoe nails to inscribe the names and messages.

At the end of line three in the photo (left), begins the phrase "paso por aqui (aquy)" or "passed through here" written by many Spaniards. This message was inscribed in 1709. 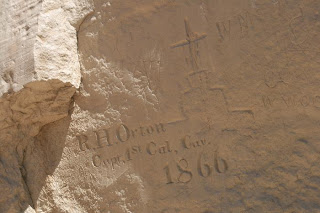 This carving, made in 1866 by R. H. Orton, includes a church and cross. Orton became adjutant-general of California after the Civil War. In the early years of the War, the California Column had been sent to New Mexico to reinforce federal troops expecting Confederate hostilities. 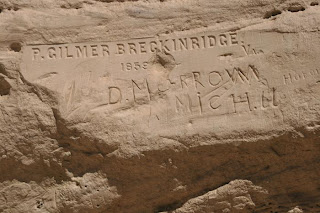 We hadn't known that there had been an attempt to use camels in the military in the Southwest, but P. (Peachy) Breckinridge was the man in charge of the 25 camels used by Lt. Edward F. Beale in 1857.

E. Penn Long of Baltimore, whose inscription was unusual 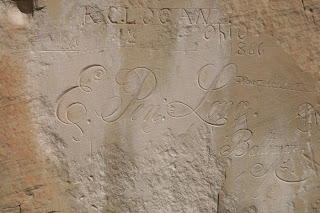 in that it was inscribed in elegant script form, was a member of a U.S. Army expedition led by Lt. Beale that was also testing the use of camels in the deserts of the Southwest.

The Army abandoned the experiment at the onset of the Civil War. 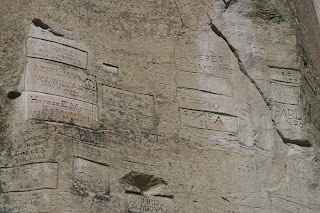 This photo shows a portion of Inscription Rock that bears many names and dates. In the upper right hand portion of the photo are names with the designation "U.P.R.," carved by workers of the Union Pacific Railroad survey crew in 1868.

The inscription in these last two photos is unique, if not humorous.

Lt. J. H. Simpson, an Army engineer, and R. H. Kern, a Philadelphia artist, were the first English-speaking people to make a record of Inscription Rock. They carefully duplicated the historical marks, but they made a mistake of their own. 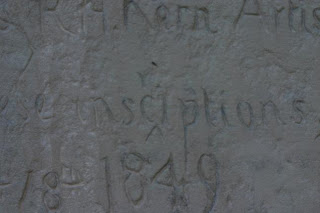 Instead of "inscrip-tion," they carved "insciption." But they also used the "^" symbol to indicate where the "r" should be.

We could almost feel the presence of many of these visitors to this site as we walked the trails.
Posted by The Wanderers at 9:30 PM