the middle of nowhere. Here it is. 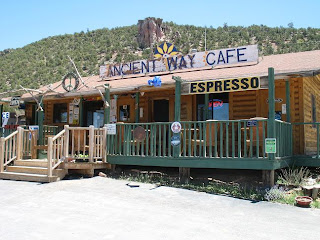 One mile east lies the El Morro RV Park and Cabins with its adjacent Ancient Way Café. To be honest, if I were just passing on the road, I might not be inclined to stop and dine. Fortunately for us, we had read about this small restaurant and knew that this was not one of your run-of-the-mill dives.

As described on their web site, “The Ancient Way Cafe is an out-of-the-box restaurant. 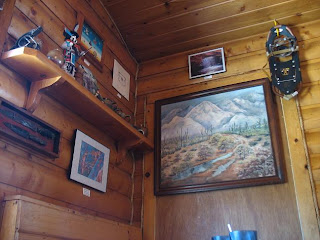 Our focus is to buy as locally as possible, supporting friends and neighbors. We live quite rurally so commu-nity develop-ment is vital. We create pies made from scratch with fresh fruit—our crusts are out of this world! We serve a different gourmet dinner every Friday and Saturday. Most of our food is made on the premises…” A sign by the door announces that their eggs are from free range chickens, their produce is organic, their beef is hormone free, and no MSG is used.

During our brief conversation with the chef/manager 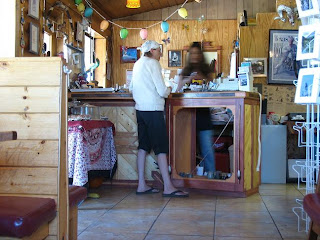 Maqui (a former potter) we learned that, following the adop-tion of this food philosophy, their business increased to such an extent that they went from one employee to seven. 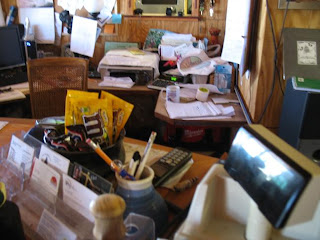 Not bad for a very small café that seats only twenty (at most) inside and another fourteen to sixteen on the porch. (The paper work tasks must have also increased in a propor-tionate amount judging from the desk/cash register area.)

We chose to eat inside and snagged the last two seats available. Most of the customers seemed to be locals who maintained a constant level of verbal jabs with Maqui. (Some relating to his choice of attire--an electric pink shirt and striped pants that just screamed 1960’s.) At one point, Maqui could be heard singing along with Aretha Franklin—“R-E-S-P-E-C-T.” Through the window separating the counter from the kitchen, a very large young man in a doo-rag could be seen jiving to the music as he manned the grill.

We were there for lunch, so we didn’t have the chance to sample one of Maqui’s gourmet dinners. 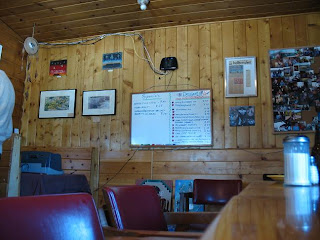 The breakfast/lunch menu listed most of the standards, but a blackboard on the wall listed the day’s specials--a brisket burrito with habanero/ apricot barbeque sauce, a tuna melt, and a bowl of green chile with a flour tortilla. Also listed was a wide ranging selection of desserts and pastries, but we’ll get to them later. (You didn’t think we wouldn’t get to them. Did you?)

Chuck ordered off the menu and had the chopped brisket sandwich on a whole wheat bun. He had his choice of their regular barbecue sauce or the habanero/apricot. He chose the regular which was not too sweet, not too tart, and not too tomato-tasting and had a slightly smoky flavor. 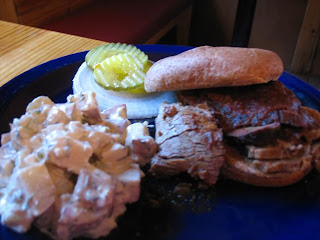 The meat was moist and devoid of fat and gristle. With this came a side of truly fine red skin potato salad that was somewhat tart and contained celery and dill. I’m not sure if I have ever mentioned this, but he is very picky about potato salad, so it is a testament to Maqui’s skill in the kitchen that Chuck thoroughly liked this salad. 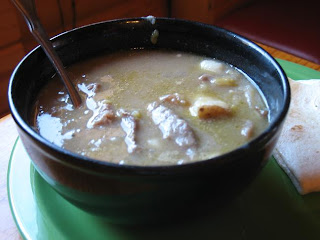 onions, New Mexico green chiles, and large chunks of tender beef. The use of beef was new to me. All of the other green chile stews I’ve eaten in New Mexico have either contained pork or were meat-free. The green chile wasn’t combustible but had a heat that, after a few spoonfuls, hit in the back of the mouth. 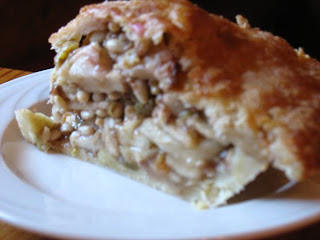 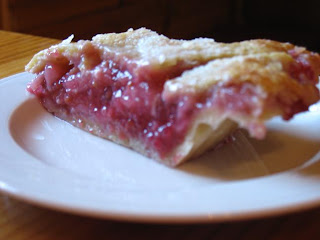 was the real winner. The sweet pears and tart berries alone would have made for a great taste com-bination, but the addition of the fresh ginger, as Emeril would say, “Kicked it up notches unknown to mankind.”

This is a fun and off-beat little café and is worth a stop for anyone visiting El Morro National Monument and merits a 4.0 Addie score. 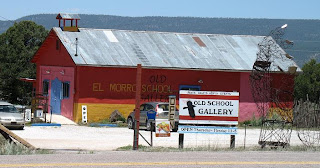 Leaving the Cafe, we saw the Old School Gallery, another intriguing spot to visit on another day.
Posted by The Wanderers at 5:48 PM