Christians, Jews, and Muslims Together

"Interesting architecture," was our hurried comment on the structure shown below. 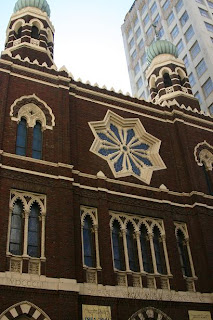 "It certainly doesn't resemble any other New Orleans' buildings we've seen," was our common assessment.

This certainly warranted a return visit, but Kate was on a search for the Fairmont Hotel. We had toured the hotel when it was decorated for Christmas and marveled at..., but that's a story for a later date. 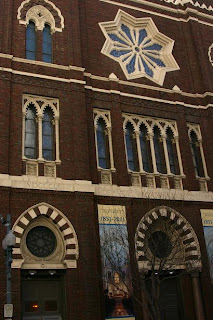 A return visit to this building a few days later provided considerable information on just how interesting the architecture was.

The graceful arabesque arches of the Church of the Immaculate Conception were just the beginning of an interesting story about this church, known locally as Jesuit Church. 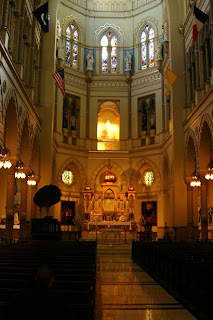 "In 1837, the Jesuits were allowed to return to Louisiana after having been expelled from all French territories 74 years earlier.

"In 1851, construction began on a church on this site; it was dedicated six years later. 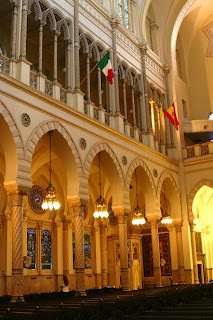 "In the 1920s nearby construction caused irreparable damage to the church's structure. It was ordered closed in 1929, but because of the extraordinary quality of its original materials, the church was not demolished. It was dismantled.

"The present structure, a near-replica of the first, was dedicated in 1930. 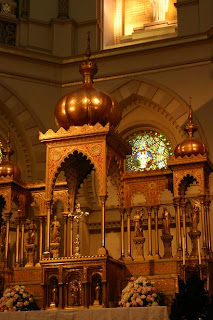 "The church, with its onion-domed altars and geometric ornamentation throughout, was designed by Fr. Cambiaso, to imitate the Moorish chrches of Spain, where he had lived for a period of time.

"The architectural style reflects a period in Spain's history when Muslims, Catholics, and Jews lived together peacefully and exchanged freely their cultural and intellectual heritages. 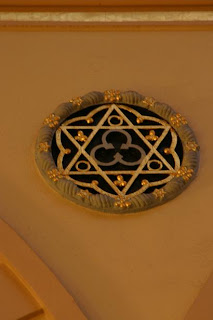 "It is perhaps his appreciation of this same period of peaceful coexistence that further inspired Fr. Cambiaso to fill the church with hundreds of Stars of David. They are literally everywhere. Here (left) the symbol of the Trinity can be found within a multiplicity of Davidic stars.

"Regardless of their original inspiration, the melange of Islamic architecture with Jewish and Christian symbols stands as a reminder and challenge to all people of good faith to respect each other and to work together for the greater glory of the one true God. 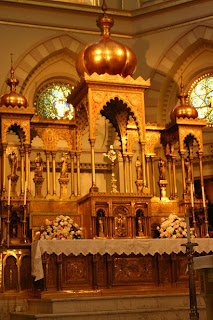 "Dominating the sanctuary is a gilded altar with three onion-shaped domes. Designed by New Orleans architect James Freret, the bronze altar won first prize in the Paris Exposition of 1867-1868. Constructed in Lyons, France, it is comprised of 600 pieces, all of which were plated in 24-carat gold." 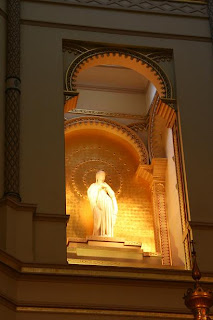 High above the altar is a statue of Mary, carved of the purest marble. 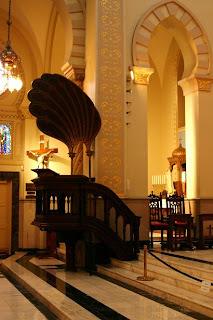 "On the left-hand side of the sanctuary is a mahogany pulpit. Its height, along with the acoustical shell above it, allows the preacher's voice to be heard throughout the entire church without amplification." 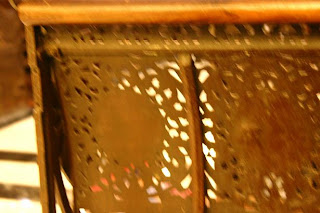 The pews are made of cast iron. 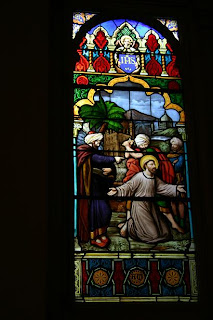 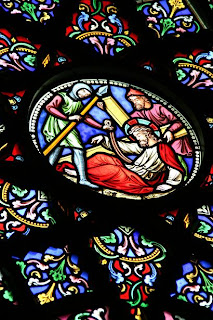 "Above the windows are circular windows. Part of the original church, these windows contain Stations of the Cross. Since the windows predate the twentieth century decision to limit the number of official stations to fourteen, the church contains eighteen stations." 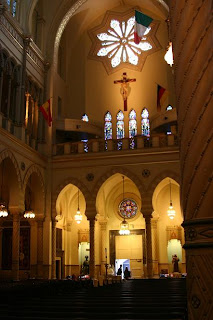 Looking to the rear of the church, we could see a cross and a rose window. 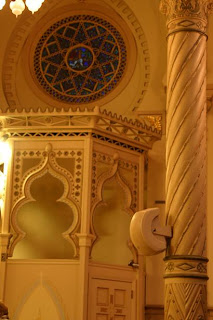 We thought this structure was a confessional. 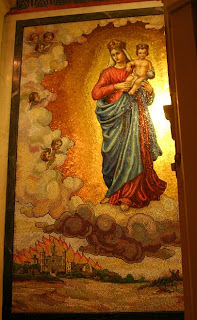 "At the rear of the church were two mosaic shrines. This one (left) is Our Lady of Prompt Succor. Devotion to her grew due to two miraculous interventions attributed to her. The interventions are dipicted in the two bottom corners of the mosaic. 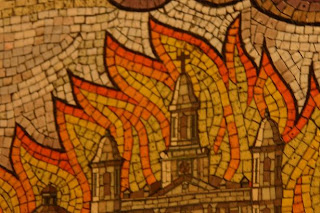 "To the left is the fire of 1812, which destroyed most of the city but left the Ursuline convent standing. 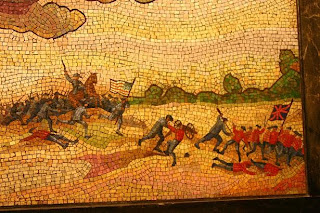 "To the right, Andrew Jackson is shown defeating the British in the 1815 Battle of New Orleans."

(The material quoted is from a brochure describing the church and its history.)
Posted by The Wanderers at 7:14 PM