A Nawlins' Walk: Architecture and Culture

We continue our walk down Canal Street, which, for than a century, was the main shopping district of Greater New Orleans. 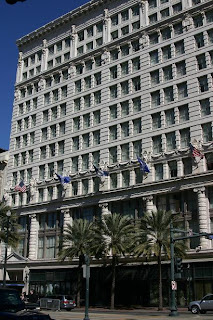 Local department stores, such as Maison Blanche (right and below), and national retailers, such as Kress, anchored numerous well-known specialty retailers.

Maison Blanche's original building on Canal Street was demolished around 1908. This distinctive new building was constructed around 1908–1909. At one time there were many medical and dental offices in the top floors. 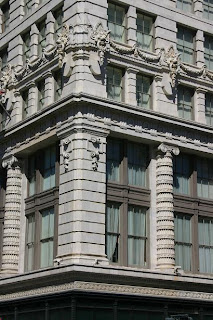 The Canal Street store was closed in 1982 by the City Stores Company and reopened in 1984. In 1997 work began to use the upper floors as part of a new Ritz-Carlton hotel. However, after Dillard's acquired the store, it was closed. The whole building, along with the neighboring Kress building, is now part of the 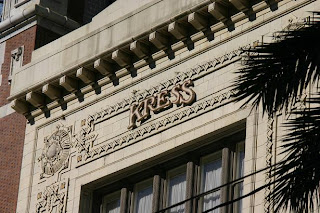 New Orleans Ritz Carlton, which had a grand opening in 2000.

Samuel H. Kress opened his first "stationery and notions" store in Nanticoke, PA, in 1887. The chain of S. H. Kress & Co. 5-10-25 Cent Stores was established in 1896. Throughout the first half of the twentieth century Kress stores were a familiar sight on "Main Street" in hundreds of cities and towns. 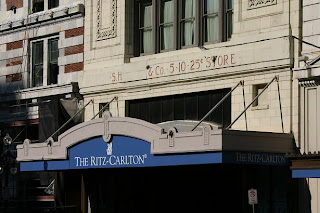 The Kress chain was known for the fine architecture of its buildings. "Samuel H. Kress... envisioned his stores as works of public art that would contribute to the cityscape." A number of former Kress stores are recognized as architectural landmarks and many are listed on the National Register of Historic Places, including this 1913 building (the two photos above). 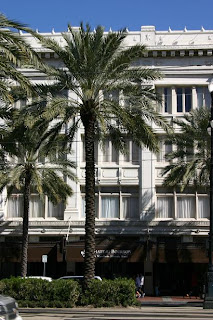 The hotel was occupied during and immediately after Hurricane Katrina. It suffered considerable damage; the basement was flooded and the electrical systems, laundry, and staff cafeteria were damaged. The Ritz-Carlton reopened on December 4, 2006, after a $106 million refurbishment. 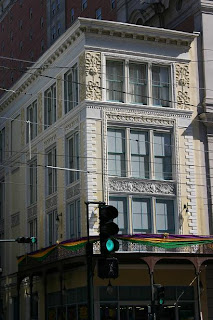 Beginning in the 1970s with the completion of the New Orleans Marriott, Canal Street began to accommodate large convention hotels. 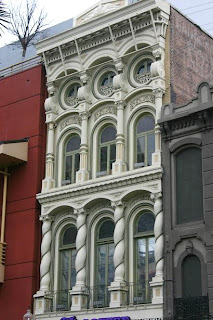 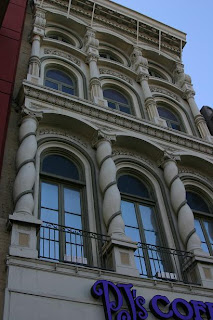 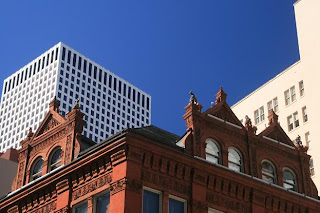 The contrast between old and new architec-tural forms, in some views of the buildings within the Central Business District, is striking. 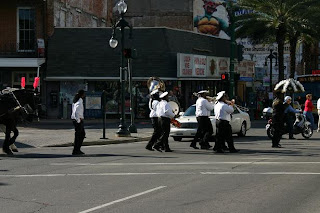 Our photography walk completed, we boarded the Canal Street streetcar to meet our shuttle back to the RV park.

As we neared the next to the last stop before our destination, we came 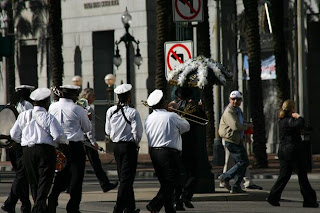 upon this scene. We quickly exited the streetcar to watch the procession for a brief period of time. Being pressed for time, we had to wait until later to read up on the jazz funeral procession. 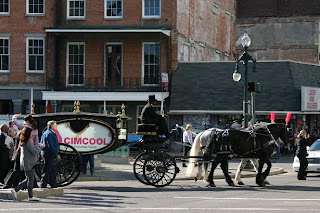 According to neworleans online.com, "When slaves were brought to America, the idea of providing a proper burial to your fellow brother or sister remained strong. As time passed, these same concepts that were rooted in African ideology became one of the basic 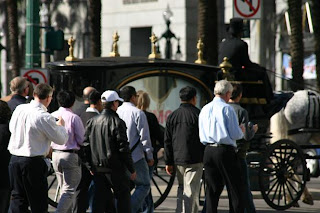 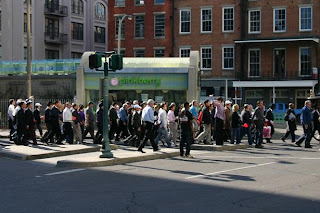 "The practice of having music during funeral processions, Danny Barker said, was added to the basic African pattern of celebration for most aspects of life, including death. As the brass band became increasingly popular during the early 18th century, they were frequently called on to play processional music. Eileen Southern in The Music of Black Americans wrote, 'On the way to the cemetery it was customary to play very slowly and mournfully a dirge, or an 'old Negro spiritual' such as 'Nearer My God to Thee,' but on the return from the cemetery, the band would strike up a rousing, 'When the Saints Go Marching In,' or a ragtime song such as 'Didn't He Ramble'.'

"Sidney Bechet, the renowned New Orleans jazzman, after observing the celebrations of the jazz funeral, stated, 'Music here is as much a part of death as it is of life.' 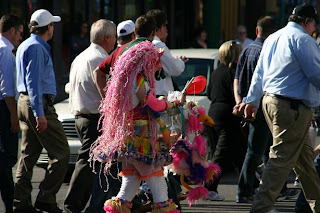 "The traditional New Orleans jazz funeral is as much a part of the fabric and rich cultural traditions of New Orleans as red beans and rice."

And another custom is that of dancing. The "Second Line" is a two-step of sorts, and is quintessential New Orleans. Dancers wave around handkerchiefs or umbrellas as they move to the beat in a front and back motion.

It was brief, but it was another glimpse into the culture of Nawlins'.
Posted by The Wanderers at 4:06 PM