Once Chuck was finished with his self-analysis session (see yesterday’s entry), it was time to make our way to Rooftop Pizza for lunch. 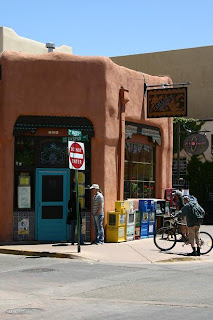 Our route took us past Café Pasqual’s, one of Santa Fe’s better known small cafes. (Chuck took this photo of the Cafe because of the interesting placement of the "Do Not Enter" sign at the Cafe's front door. Only later did he realize that the pedestrian behind the cyclist was wearing a wolf head hat.) We had eaten breakfast here about six years ago, and to be honest, we were not impressed. 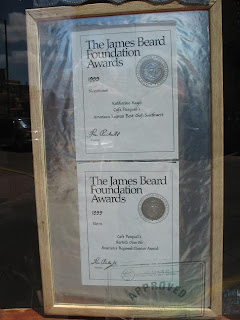 So this was not on our Santa Fe dining list.

We paused to look at the lunch menu posted to the right of the door and the James Beard awards to the door's left, and while we were reading, two stylish women came up and said: “The best food in Santa Fe. You won’t be disappointed.” We looked at each other, and Chuck said: “Do we give them another chance?” The answer was yes.

“Cafe Pasqual is named for San Pasqual, the folk saint of Mexican and New Mexican kitchens and cooks. Our historic pueblo-style adobe is located one block southwest of the Plaza, in the heart of downtown Santa Fe. 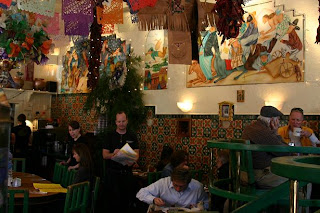 Our festive dining room is lined with hand-painted Mexican tiles and murals by the renowned Mexican painter Leovigildo Martinez, depicting the moon reveling at her fiesta. Pasqual's is a small cafe by any standards, seating only fifty at a time… We are devoted to food quality, and currently offer organic and naturally-raised beef, pork, eggs, dairy, produce, sugars, flours, maple syrup, flavorings and spices!” (From the restaurant’s web site.)

We arrived soon after noon and found the restaurant to be full except for the “communal” table with seating for ten or twelve. Neither of us was in the mood to socialize (except with each other), so opted to wait. 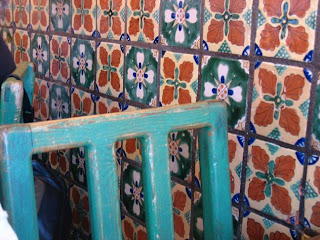 Soon we were seated on the small elevated platform with four tables of four set very close together by the front windows. To my left, were the aforementioned tiles and mural. 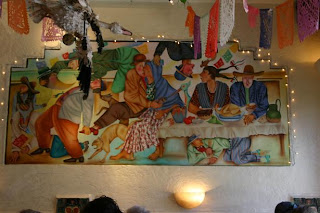 Hanging over my head was either a paper Maché goose or stork (upper left in the photo on the right), part of an exhibit of works entitled, “It’s Only a Paper Moon” by Rick Phelps that was showing in the second floor gallery. These sculpted pieces employ everyday found paper and recycled items, and the subjects range from a chimpanzee, a “box turtle”, a prairie dog village, and a “cowboy riding a bomb” piñata. 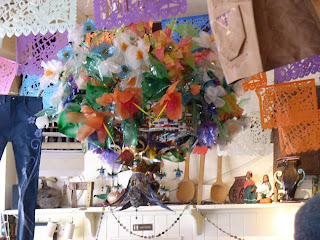 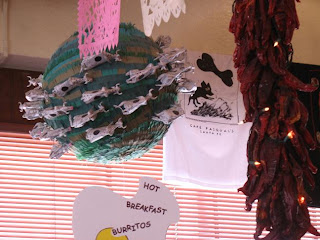 and the cows circling the moon are also his works.

Our professional, but friendly, waitress came with colorful menus (below), told us the day’s specials, and indicated that we could still order from the breakfast menu. There were so many interesting lunch entrees: the Carne Asada –grilled Niman ranch marinated beef with guacamole, roasted tomato-jalapeño salsa, black beans, sour cream, 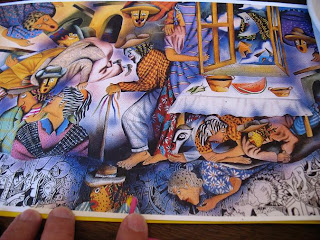 Chuck never fails to surprise and ordered Pasqual's Favorite from the breakfast menu. 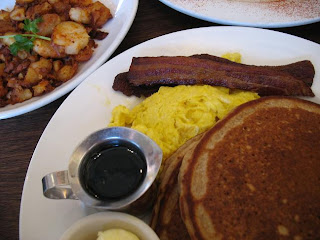 This was two whole wheat pancakes with pure maple syrup, two large eggs (scrambled) and two strips of applewood smoked bacon (his choice) or house made sausage patty, turkey bacon, or pork chorizo. To this he added a side of seasoned papitas (potatoes). Everything on his plate was perfection. The pancakes were light without the baking powder flavor that he finds off-putting and the whole wheat flour imparted a light nutty taste. The bacon (he would only give me an inch long piece) was crisp, but not burned. The scrambled eggs were moist, so moist that he asked me to taste them since he feared they were undercooked. They weren’t. And the serving of REAL butter came in a dish and not in a foil packet.

I debated between one of the specials and the carne asada. Since you can find carne asada almost anywhere, I chose the special – two corncakes folded around a mélange of lightly cooked spinach, zucchini, corn, and green and red pepper and served with casa blanca cheese sauce. 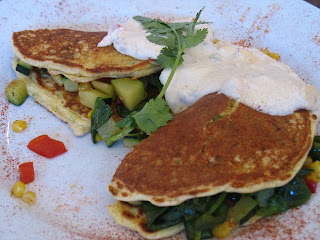 The corn cakes resembled larger versions of Johnny Cakes or, if you are in the South, Hoecakes. The corncakes were also light with great corn flavor; the veggies were crisp tender – even the cooked spinach; and the casa blanca was rich with cream cheese and, according to our waitress, contained almost twenty ingredients.

After all of this food we (especially Chuck) weren’t sure we wanted dessert, but curiosity required that we look at the dessert list. When I saw that the menu included a Meyer Lemon Ice Cream with a Honeycomb, 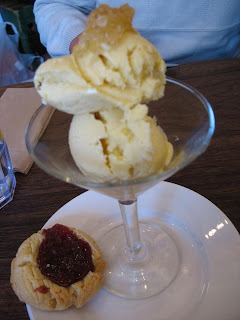 I persuaded Chuck that he would be able to eat a few spoonfuls. Few spoonfuls? I had to fight for my share. The Meyer lemon is a citrus fruit that is native to China and is thought to be a cross between a true lemon and a mandarin orange or sweet orange. But my allergy to oranges didn’t kick in and all was well. The ice cream is made in the restaurant’s kitchen and had a deep intense lemon flavor, but without the mouth pucker. The honeycomb was a large “dollop” of reduced honey and with a spoonful of the ice cream made a wonderful sweet and tart contrast. And the raspberry thumbprint shortbread cookie, which I generously shared, rounded out the plate.

Well, we didn’t get pizza, but we’ll be back in Downtown Santa Fe on another day. Our lunch proves again that (almost) every restaurant kitchen deserves a second chance and we award Café Pasqual’s our highest rating of 5.0 Addies.
Posted by The Wanderers at 8:39 PM