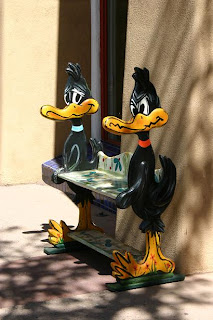 Continuing our walk around Santa Fe’s Plaza that we began yesterday, we came upon these two characters. It was a bit difficult to read their expressions; we weren’t sure whether or not they were inviting us into the Chuck Jones Gallery. 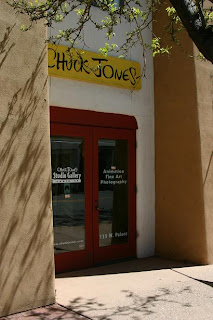 I guess I’m a bit slow on the uptake, because all I noticed on the door to the Gallery was the word “Photography.” Had I caught the words “Animation” and “Fine Art” that preceded “Photography,” I would have been more enthusiastic as we crossed the threshold. Nevertheless, I entered expecting to find the works of modern-day photographers on display. 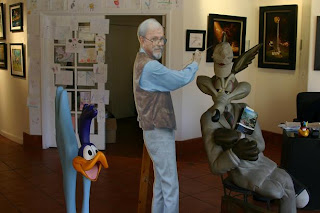 We were “greeted” by the Road Runner, a Chuck Jones cutout, and Wile E. Coyote.

During the Golden Age of animation, Jones helped bring to life many of Warner Bros. most famous characters—Bugs Bunny, Daffy Duck, Elmer Fudd and Porky Pig. 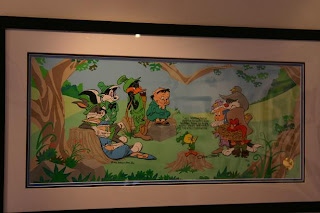 Several of these characters are present in this cel. Here Tweety is talking to Robin Hood: "Yes, Wobbin, these are the shewiff’s who wobbed from us poor witto swobs and gave it to the wich . . . themsewves."

The list of characters that Jones himself created includes Road Runner, Wile E. Coyote, Marvin Martian, Pepe le Pew, Michigan J. Frog and many others. He also produced, directed and wrote the screenplays for "Dr. Seuss’ How the Grinch Stole Christmas," a television classic. 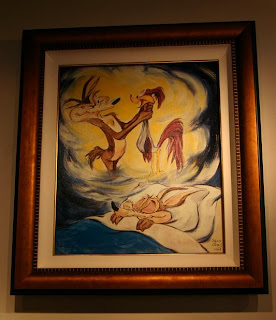 This painting had special meaning for me. I enjoyed the Roadrunner cartoons, but I always hoped to see an episode in which the hapless Wile E. Coyote would prevail--the jet shoes would not stall, the Acme kit would not malfunction, and the cliff would not disappear from beneath him, so that he could finally capture the Roadrunner. 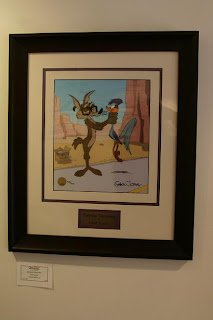 So, the dream above and the moment of success captured in this single frame (entitled “Opticular Successimus”) seemed to achieve that end. Finally, Wile E. had the elusive Roadrunner in his grasp.

Somehow, though, it is my guess that following this moment is a longer period of confusion--I believe that Wile E. has forgotten what the purpose of the chase was. There is no response--no violent end, no glorious celebration--just a look of confusion. Then he releases his grip, and the Roadrunner drops to the ground.

Both just stare at each other, each searching for meaning in their futures.

"Well, Chuck, I think our time is up for today. We'll continue next week with an analysis of your understanding of Wile E.'s purpose in life and how that relates to you." 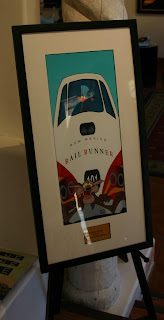 This cel is from a film with the name on the train changed from New York Non-Stop Express to New Mexico Rail Runner to commemorate the train that runs from Belen through Albuquerque to Santa Fe. 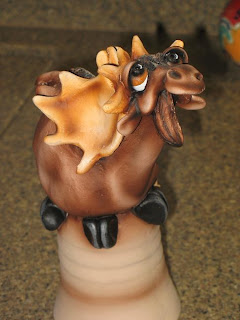 Just to walk around the studio brought to mind many Saturday mornings of cartoons.

And this ceramic moose standing on a bell (from the "sophisticated whimsy" collection of Todd Warner) reminded us of this fun place--the Chuck Jones Gallery.
Posted by The Wanderers at 7:51 PM