the healthiest meal I have eaten, but it was sure good.

Thanks to a recommendation from Karen, 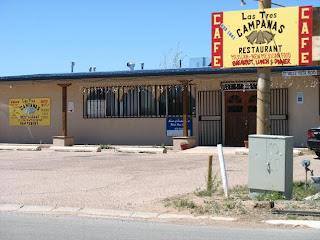 one of the owners of Santa Fe Skies RV Park, we made our way to Las Tres Campanas (The Three Bells) for a late lunch. Karen told us that the food was good, the portions large, and the prices “dirt cheap.” She was right on all three accounts. 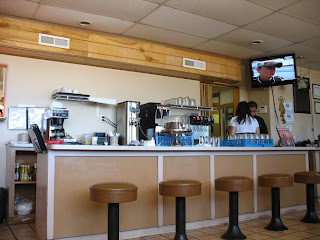 To be frank, the décor is sparse. The dining area consists of tables, booth, and a counter with stools. That’s about it. But when you have the three qualities mentioned above, who needs décor?

It appears that many of the New Mexican restaurants in Santa Fe have an all inclusive menu. 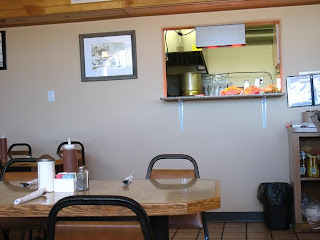 Las Tres Campanas offers burgers, steaks, sandwiches, and salads. But the emphasis is on the foods of New Mexico – tacos, enchiladas, stuffed sopaipillas, Navajo tacos, chile relleno, fajitas, pork carnitas, burritos, green chile stew, posole, and the ubiquitous quesadilla. And most of these, of course, come with the obligatory rice and beans.

Chuck surprised me and ordered something other than enchiladas. He chose the pork carnitas (in Spanish this means “little meats”). Every good Mexican and New Mexican cook probably has his or her own method for preparing this dish, but basically the meat is braised or roasted slowly until it is easily shredded or chopped and is then roasted at higher heat until it is caramelized. Flavorings can include oregano, marjoram, thyme, bay leaf, and crushed garlic cloves.

Chuck’s carnitas were cut into half-inch 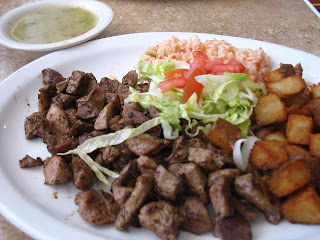 cubes that seemed to have been grilled just prior to serving. Beneath their slightly crisp and caramelized exterior was the moist and tender seasoned pork. The carnitas came with an order of papitas--small crispy, cubes of perfectly fried potatoes--a side of red or green chile (Chuck chose the green). We both agreed that overuse of the chile would overwhelm the wonderful taste of the meat.

I, who usually doesn’t order enchiladas, decided on the cheese enchiladas. But I could add chicken, beef, carnitas, or chicharrón. In Mexico, chicharróns are usually made from pig skin, but here in New Mexico they are often just fried pork fat, sometimes with incidental bits of lean meat. 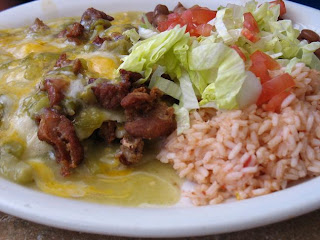 So I went for it – cheese enchiladas with chicharron smothered with green chile.

Lucky for me, these quarter inch pieces of chicharron were mostly crispy meat with just a little crisp rendered fat. The textural contrast of the crunchy meat with the softer corn tortillas and oozing cheese reminded me of one of Chuck’s favorite sayings when he wants potato chips: “Every meal must make noise.” While I didn’t make noise, I was true to the principle.

The rice and beans that came with my plate were o.k. The beans were whole, which is not my favorite preparation, and the rice contained specks of red chile. The very hot green chile that came with both of our meals was outstanding – it may even rival that of Mary & Tito’s, a James Beard award-winning restaurant in Albuquerque. 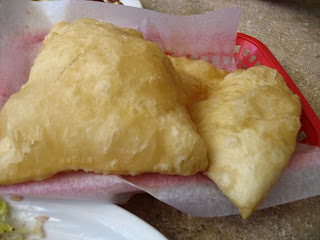 Both of our meals came with our choice of either a flour tortilla or a sopaipilla, and we both chose the latter. What a wise decision. These may have been the best sopaipillas ever – large, light, and airy with the paper thin crisp crust which is characteristic of correctly prepared sopaipillas. Again, we saved them for dessert with just a drizzle of honey.

Well, Karen was right on all accounts – great food, large portions, low prices (with tax and tip the bill came to about $20.00), and Las Tres Campanas earns a 4.0 Addie rating.
Posted by The Wanderers at 9:03 PM