Located about 27 miles northwest of Gallup, NM, just across the New Mexico-Arizona state line, on the Arizona side, is the administrative Capitol and center of the Navajo Nation, which occupies all of northeastern Arizona, the southeastern portion of Utah, and northwestern New Mexico--an area of about 26,000 square miles. 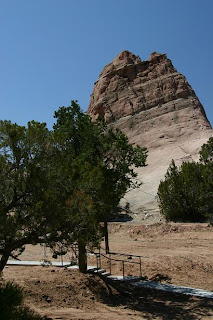 We saw several parked vehicles, most were official cars and trucks with administrative logos on them. Only a couple of steers walked the roads with us.

The parking lot was deserted save for one car from which a mother and daughter were selling jewelry. 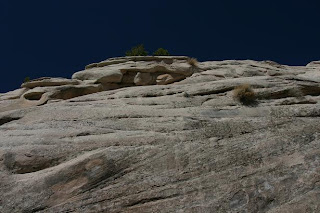 In a brief conversation with them, we learned that even though there were no other visitors, this was indeed the parking lot for the short hike to Window Rock, the formation for which the town of Window Rock, AZ, is named.

They also noted that the only other "visitor" they had seen was a coyote.

Cautiously, we headed to the main attraction of the park. 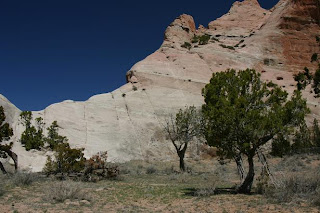 The Navajo Nation governing offices are set among some beautiful rock formations. Our short walk took us past the formations shown here.

But we had come to see Window Rock, which received its name from the hole measuring about 47 feet across in the 200-foot high sandstone hill (Window Rock). 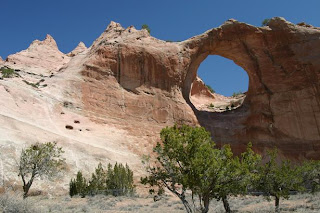 Tségháhoodzání (The Perforated Rock) is important in the Water Way Ceremony. It was one of the four places where Navajo medicine men go with their woven water bottles to get water for the ceremony that is held for abundant rain. 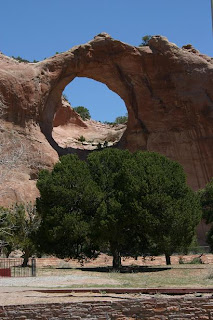 "More recently, the Navajo Nation has built a Veterans Memorial at the base of Window Rock to honor the many Navajos who served in the U. S. military. 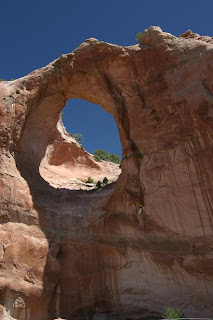 This park is significant because it was designed and built by the Navajo, it is their 'living' Veteran’s Memorial. The idea for the Memorial evolved from within a group of Native Vietnam Veterans, Navajo Code Talkers, and culturally important, Navajo medicine men. 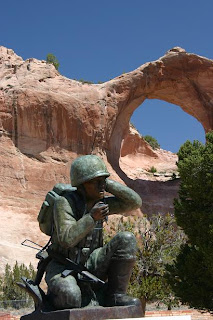 Many Navajo soldiers are recognized in the annals of history for their role as Code Talkers, whereby they used the Navajo language to create a code that was never broken by the enemy. Historians credit the Navajo Code Talkers for helping to win World War II."

A scenic and solemn experience at Window Rock.
Posted by The Wanderers at 5:04 PM