No Trip to the Galax Area… 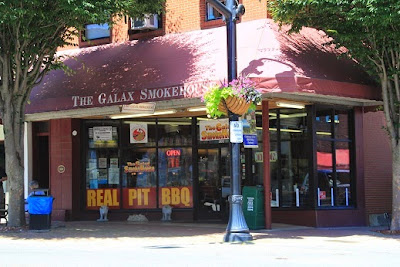 “Its official: The Galax (VA) Smokehouse has become a popular hangout for many people in the community—perhaps even those who are no longer with us. Restaurant co-owner and operator Dan Milby confirmed that the downtown Galax business will be featured…on a new episode of “My Ghost Story: Caught on Camera,” a paranormal series on the Biography Channel. The episode will chronicle an investigation of the restaurant that was conducted…by local ghost-hunting team Operation Spirit Seekers. Ghost hunter Rachel McBride confirmed that the episode will show documented evidence that multiple paranormal entities were found inside of the establishment.

“’We have voice recordings of a man and a woman talking to us and answering questions, we have video footage of different events happening, and we took photos of different apparitions and orbs and things of that nature,’ she told The Gazette….

“The barbecue restaurant at the corner of Main and Grayson streets is in one the city’s oldest buildings, originally Bolen’s Drug Store, that dates back to Galax’s founding in 1906. It also housed a doctor’s office and soda fountain in the past” (Shaina Stockton at galaxgazette.com). 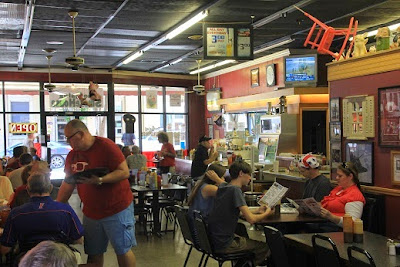 But it is no ghostly pitmaster who is responsible for the continuing success of this restaurant that opened in February 2003. No. Credit goes to co-owners Dan Milby and Ron Passmore. “…In their first year, the owners submitted the restaurant to be judged by the National Barbecue News, an organization that finds the top spots for barbecue all over the nation. ‘We didn't think we would win, but judges provide a critique for improvement, as well, and that's what we wanted,’ said Passmore. 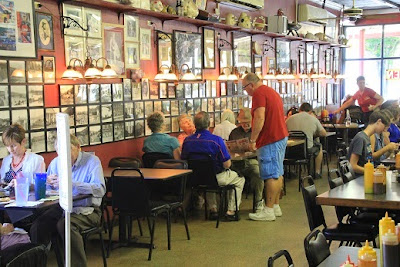 “One day, they got a call that was completely unexpected. On the other line was Kell Phelps, the National Barbecue News publisher, calling to congratulate them. ‘You could have knocked me over with a feather,’ he said. ‘I never would have believed that we could have made it on our first year.’ Since then, the restaurant has been featured in the publication every year. And since the judging is anonymous…. Passmore said that it was a testament to their consistent quality of customer service. It also says a lot about the quality of their food” (Shaina Stockton at galaxscrapbook.com). 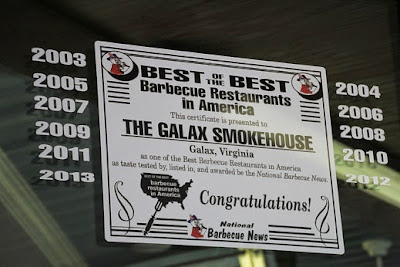 And its not just professional judges who appreciate the Smokehouse’s barbecue. Adam Bobbitt at roadfood.com wrote: “I have eaten many BBQ restaurants throughout the South, claiming to have the best ‘Southern’ BBQ anywhere. I have to say the Galax Smoke-house is by far the best I have ever eaten. I was a truck driver for 10 years and have eaten BBQ from almost every state. None comes close to the unique flavor the Galax Smoke house has perfected! ...Though the meats are so delicious they don't need sauces to ‘make them better’, the made from scratch BBQ sauce recipes compliment the meats… With four BBQ sauce flavors to choose from you will surely find one that will make your taste buds happy!” 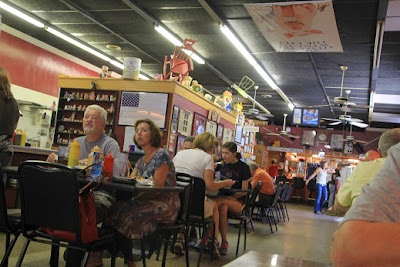 We were both hungry and ready to pig out. And Chuck took it literally and ordered one of the “Pig Out Platters” with two meats (in his case pulled pork and chicken), hush puppies, corn nuggets, and two sides. 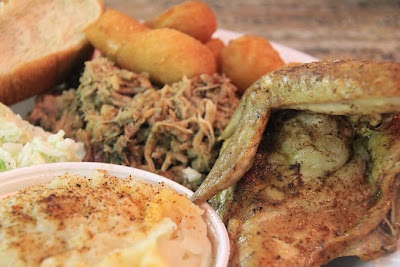 The pork was the chopped variety that I associate with North Carolina barbecue, and while I prefer pulled to chopped, this was still quite moist and really didn’t need any one of the Smokehouse’s acclaimed sauces. At first he thought that the chicken was dry but his first bite was from the pointy end of the chicken breast. This is a piece that I always cut off (along with the ribs) and save for stock later. Once he got to the thicker breast meat it was also nice and moist. 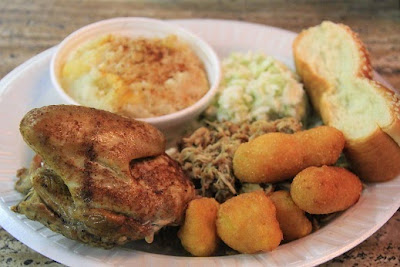 I ordered the half-pound of boneless tips cut from spare ribs that were soaked in the sweet barbecue sauce. These were very lean which is good since I really can’t stand fatty meat (other than pastrami). 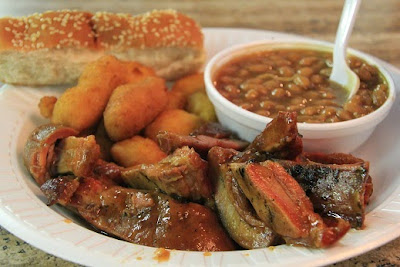 The slaw was finely chopped and not shredded as we like but was still cold and crisp and tossed with a light, creamy, and slightly sweet dressing. The BBQ beans were “Southern sweet” from molasses and contained bits of pork. The smoked mashed potatoes were lightly smoked so that you could still taste potato.

But the hit of the sides were the corn nuggets. Think of a very thick creamed corn mixture that is somehow formed into balls and then rolled in crumbs and deep fat fried. These would be great bar food with a pitcher of beer. 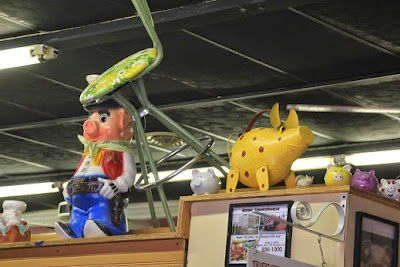 Both of us left thinking that all that was missing was a ghostly apparition and award Galax Smokehouse 4.5 Addies.

To review the role of Adler and the Addie rating system, read the November 14, 2011 blog.
Posted by The Wanderers at 5:09 PM