Fog and the Hungry Clam 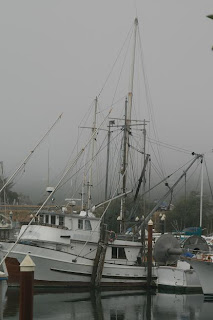 --needing the difference between the air temperature and the dew point to be 5 degrees F or less in order to form. Under these conditions, when water droplets are on their way up to the clouds, they will bond together close to the earth and form fog. 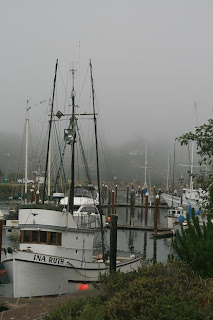 --different kinds depending on how the cooling that caused the condensation occurred: Radiation fog, sea fog, advection fog, . . . . 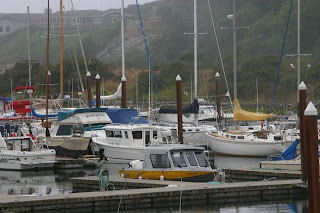 Let's just say fog is a stratus cloud that has touched the earth. And the part of the Earth we were in recently was Brookings Harbor, OR. At times there are two towns identified: Brookings and Harbor; other times it was one town. 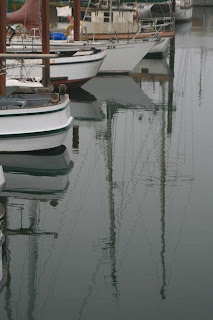 The marina serving these towns, located just across the California-Oregon border, was the ideal place to photograph fog. To me, fog engulfing ships and boats by blending sky and water presents a comforting, albeit somewhat eerie, picture. 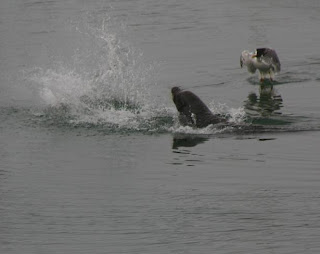 The stillness of the scene was broken by a sea lion (?) which seemed to be throwing something it was eatiing, then retrieving it, and then repeating this sequence. One gull was attracted to the sea lion's actions and, at various times, hovered overhead, stood--briefly--on the sea lion's head, and dove for whatever was being tossed around. 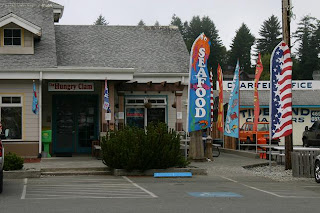 Kate: So you’ve spent the morning photo-graphing the harbor. You’ve listened to the call of the fog horn. You’ve smelled the salty (and somewhat fishy) sea air. You’ve developed an appetite. What to have for lunch? Certainly not a burger or a salad or a taco. You want fish. Deep fried, if possible. You want The Hungry Clam.

We found this small fish and chips house via the internet and those posting comments raved about The Hungry Clam's chowder and fish and chips. 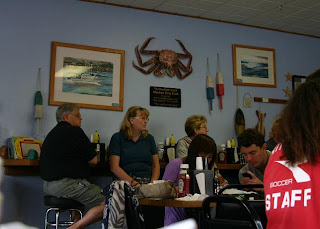 When we arrived there was only one older man slurping down a bowl of chowder. By the time we left, all eighteen seats inside were occupied as were most of the picnic tables in the parking lot. 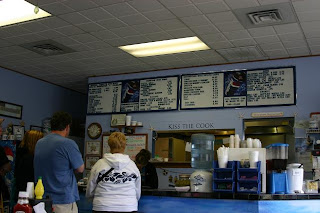 Given that the morning was cold and foggy, we took seats inside after placing our order at the counter.

Both of us started with a bowl (O.K. – it’s a paper container) of the highly-praised chowder. I am not the biggest white clam chowder fan. That spot is reserved for Chuck. 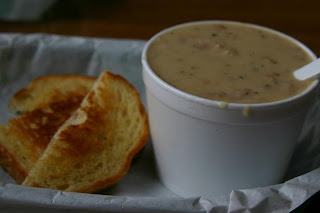 But I must admit that this was one fine chowder. Thick, but not too thick. Extra creamy. Not too many potatoes. Lots of clams. Plenty of ocean flavor. And gently seasoned with herbs. Just what a white clam chowder should be. If only there had been some salt pork and it would have rivaled the best of New England.

The menu isn’t all fish. You can order a burger in any number of permutations, hot dogs (probably for non-fish-loving kids), a B.L.T., P.B. & J. (the kids again), and salads. I had been hoping for appetizer portions of clams or calamari or shrimp, but everything came as a full meal with cole slaw and your choice of fries, hushpuppies, or tots. Then we saw the Ultimate Combo meal with fish, shrimp, clam strips, calamari, and oysters. When the young woman behind the order counter assured us that this was large enough to share, we went for it along with an extra side of slaw.

While the meal had more winners (at least for me) than non-winners, all was not perfect. 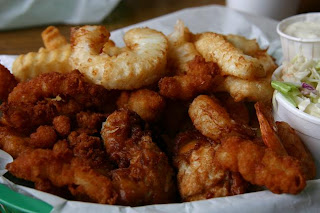 Both of us were disappointed with the fish which we compared unfavorably with Mont-gomery’s in North Vancouver, British Columbia. The coating/ breading/ batter was way too thick, and the fish was a bit overcooked. The clam strips were chewy on the ends which tend to be thinner and thus cook faster. The shrimp had great seasoning, but also was a bit overcooked. So much for Chuck’s portion of the combo.

The basket contained two large, plump, and juicy oysters in a thin and crunchy batter. If you love oysters—and I do—you would love these. Chuck, not being an oyster lover, cut into one and saw how large it was and told me “You can have both of these.” I didn’t argue. And, instead of being in rings, the calamari came as strips about a half an inch on all sides. And they hadn’t been dipped in any coating, they were just lightly fried. I loved them. He didn’t.

The crinkle fries were forgettable. I am sure they came from Sysco or some other restaurant supplier. But the slaw was quite good with a light and creamy dressing.

The Hungry Clam is certainly not the best fish and chips joint we have visited, but still earns a 3.5 Addie rating.
Posted by The Wanderers at 5:18 PM