We began our stay near Vancouver by taking the Skytrain to the Waterfront Station. 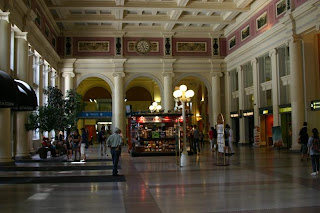 Ticketing was efficient, the train was fast (with only a handful of characters), and the station was a restored masterpiece. 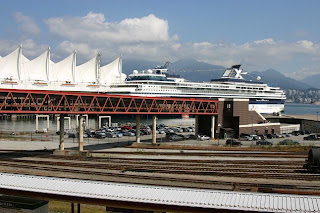 The harbor (northeast of the station) was quite active--the Skytrain connects with the Seabus to North Vancouver, the West Coast Express train, and an array of bus routes. Cruise ships also stop here. 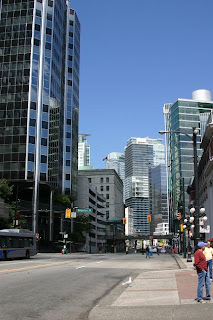 Exiting the station and looking to the northwest on W. Cordova Street, I saw a modern Vancouver with sleek steel and glass giants. 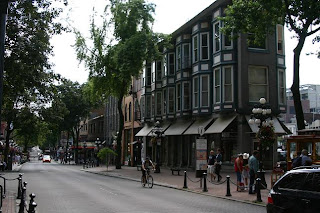 Walking about a block to the southeast, we entered the western part of what is known as Gastown and stepped back in time. Completed in 1896, the Holland Block (right) was constructed in the flat-iron shape to make maximum use of the resulting triangular-shaped lot. 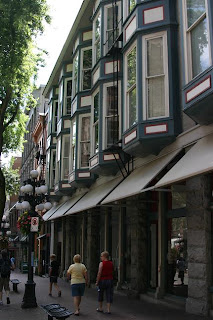 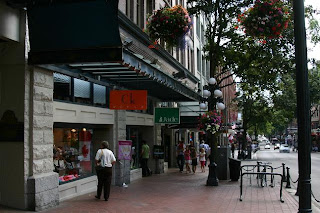 arrived on the shore of Burrard Inlet. (He received his nickname because of his penchant for spinning tall tales and talking without end). He stepped ashore with a barrel of whiskey, telling the millworkers that if they’d build him a saloon, he’d serve them drinks. 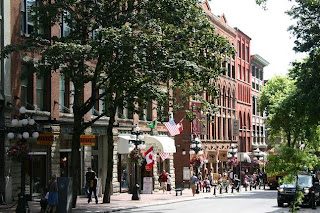 The saloon was up and running within a day…just across the property line of the mill. (The man certainly knew the definition of "incen-tive"). 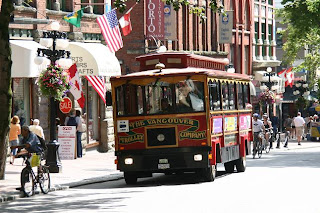 This was just one of the stories about Vancouver's history presented during the course of our trolley tour around the city.


Behind the street lamp and the flower baskets hanging from it is the Hudson House. 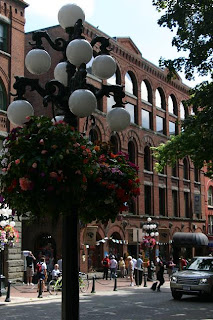 This Gastown building was built in 1895 as the Hudson Bay Company's fur and liquor warehouse and continued in use as The Bay's warehouse into the 1960s. A renovation to accommodate offices and retail tenants was completed in 1977.

An attempt in 1870 to give Gastown a more distinguished name 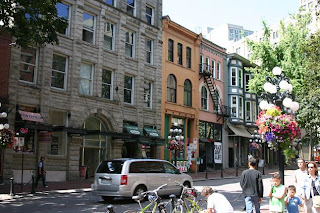 (Granville) was ignored by the citizens who continued to call it Gastown.

But Gastown was incorporated as the City of Van-couver in April of 1886. Ironically, only two months later, a brush-clearing fire got out of control and turned all but two of Vancouver’s 400 buildings to ashes. 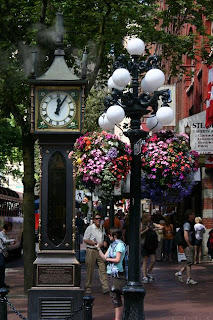 Although it is promoted as a heritage feature, Gastown's most famous landmark is its steam-powered clock is of modern invention.

The clock, built in 1977 by Raymond Saunders who owns the Gastown Steam Clock Company, is based around an 1875 design of a clock 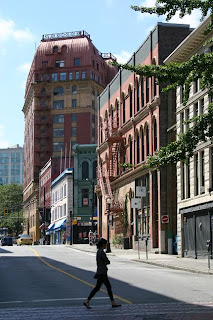 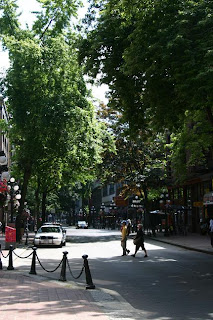 After the Depression Gastown was a largely forgotten neighbourhood of the larger city and fell into decline and disrepair until the 1960s when a diverse group of citizen groups pressured the provincial government to declare the area a historical site in 1971.
Posted by The Wanderers at 8:10 PM