It was only a 12-minute "voyage," but the trip across Burrard Inlet seemed longer in the foggy, overcast morning. 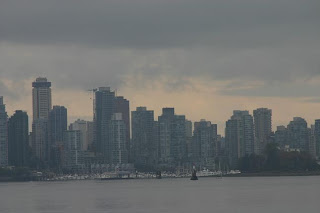 Our Day Pass covered the ticket on the Sky-Train to Van-couver's Waterfront Station and the transfer to the SeaBus for the trip to North Vancouver. After two rainy days had led to postponements of this short trip, we gambled that the forecast of only a 10% probability of rain would mean clear weather. 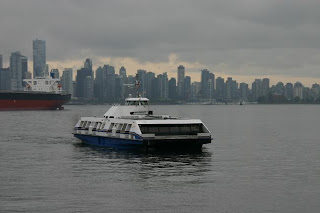 As our ferry moved through the water, we watched the gray Vancouver skyline fade into the equally gray mist; we knew we had lost on that gamble. 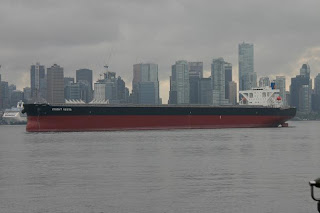 But, . . , as I've said before, the fog and low clouds provide a neutral background for different ways of looking at scenes. I don't know if it was the weather or the angle of this shot, but the freighter Orient Vesta anchored in the center of the Inlet seemed to dwarf the skyline.

The MPV Constitution, Vancouver’s only authentic 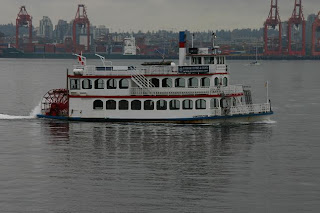 paddlewheeler, is the most photo-graphed vessel in Vancouver.

Its emergence from the mist seemed analagous to the appearance of this mode of transportation from the curtain of the past.

Before we entered the Quay, we walked around the waterfront. One of the advantages of photographing in the absence of the bright sun is that we can shoot from any angle, and with the gray background, some colors become very striking. 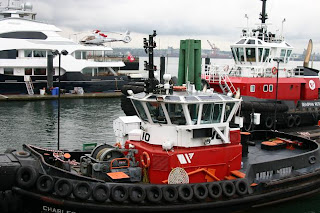 The whites and reds of the Charles H. Case tugboats along the dock were more brilliant under these conditions and even outshined the yacht Attessa and its helicopter pad in the background.

Incidently, the yacht was used for two movie productions, Indecent Proposal and Overboard. 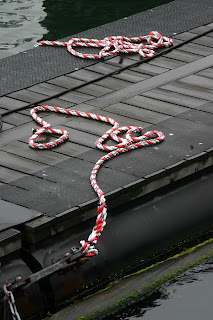 Just a few meters (we're in Canada after all) away, was this scene (right).

I just liked the colors against the dark dock. 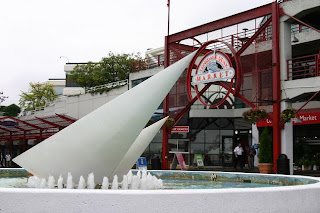 This pair of sails in the fountain on the plaza marked the waterfront entrance to the Market.

It would be easy to spend several hours browsing through over 90 different shops and services in the Market. 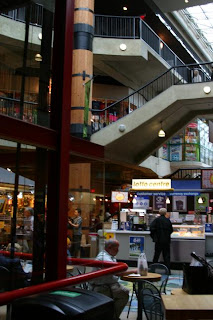 We spent all of our time in the eateries and food-related shops on the first floor of this multi-level waterside market. 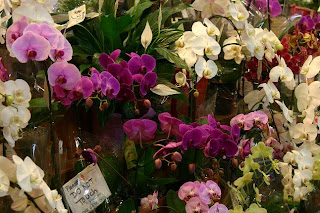 Also on the first level were flower shops. 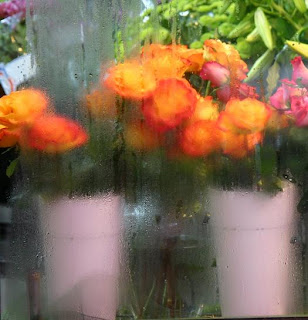 I liked the effect the condensation on the inside of this glass panel had on the view of the flowers within the display case. 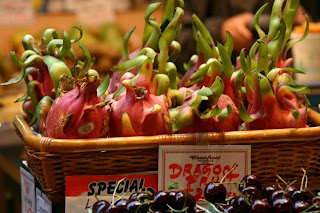 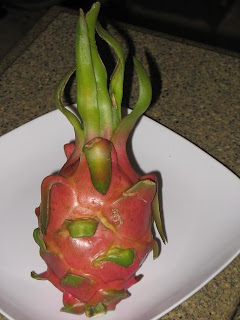 These were the first dragon fruits we had seen, and we were curious enough to buy one.


(We jump forward for a moment to show this one dragon fruit. 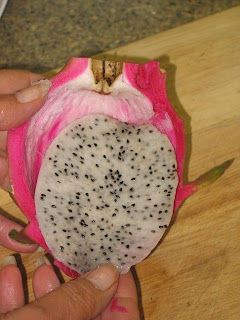 To get to the fruit, Kate cut the fruit in half and then folded the outer shell away from the fruit. The fruit had the consistency similar to a pear, but with almost no flavor at all.) 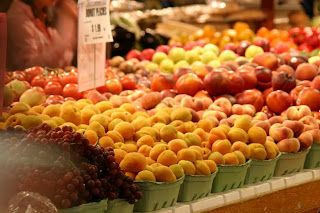 Other shops presented fresh fruit and produce. The photographs here were taken to show the color combina-tions in the displays. 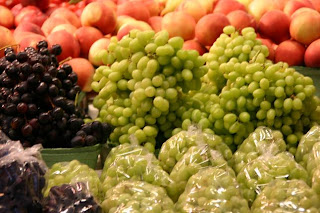 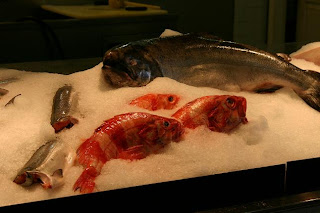 We began feeling hungry as we passed this display case of fish on ice. 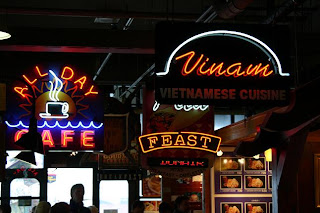 Finally, we just happened to find our-selves in the Interna-tional Food section of the Market. We had choices of Vietnamese (Vinam in the photo, above), Japanese, Greek, Chinese, Indian--and the one we specifically had in mind. (Join us tomorrow.)

I guess the title should have read "Three Destinations."
Posted by The Wanderers at 5:15 PM