Salmon Festival and The Marching Lumberjacks

Tourist brochures listed a Salmon Festival in Klamath that weekend.

It was only about 20 miles south of our campground in Hiouchi, CA (about five miles from that oceanside town of Crescent 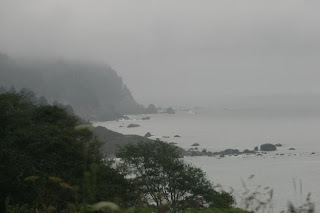 City), and since it was a cloudy, foggy day, we decided to postpone our stop to see redwoods and head south for salmon.

The drive along Highway 101 took us along the Pacific Ocean, and a couple of the overlooks provided a glimpse of the ocean below. 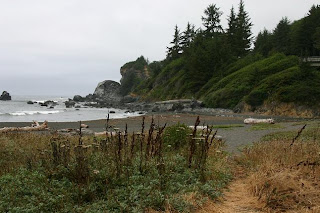 But we found other stops that took us closer to beaches along this scenic drive. Even with the fog, the beach was an inviting destination.

This was the kind of day when beach activity would consist of sitting on a log and just listening to the sound of the surf. 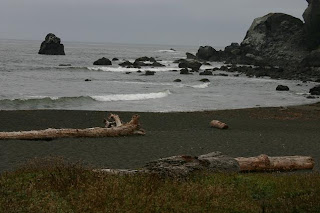 Not surprisingly, we were the only people on the beach that morning, but that desolate quality just heightened the specialness of the solitude. 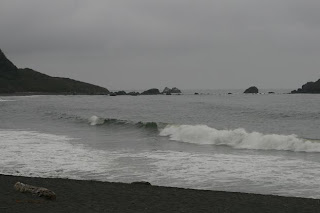 Several times we both commented that the scenes seemed to be in black and white.

Resuming our drive, we came upon Trees of Mystery. 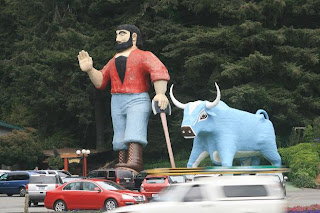 A towering 50-foot Paul Bunyan and 35-foot Babe the Blue Ox beckoned us to join their friends for a walk through, or gondola ride over, the redwood forest, but we were already going to be late for the parade at the Salmon Festival. 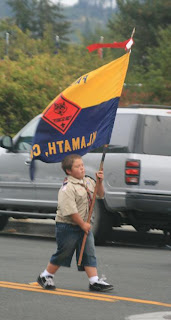 This young scout carried this flag proudly, although, at times, it was a struggle. 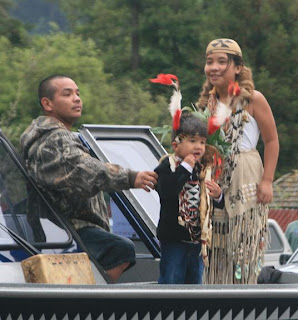 The parade had dignitaries from the Yurok Tribe, entries related to the police and fire departments and other services of the Tribe, and political issues related to Tribal concerns.

One group carried signs with "Undam the Klamath" and "Dams Kill More Than Fish," while a second group had banners proclaiming 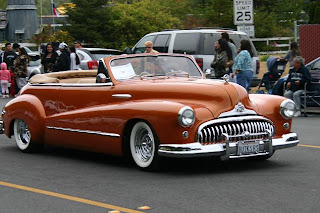 "MLPA Taking Tribal Rights Away" and "Save Our Native Culture."


And there was an impressive collection of classic and antique autos and trucks. This Buick was a standout. 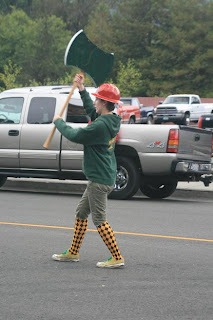 The end of the parade brought a marching band, but this was not your typical band. The difference began with the drum major, carrying an axe instead of a mace. 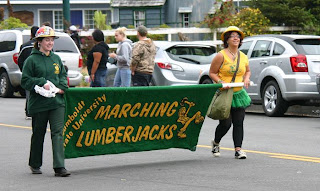 The banner announced the band as The Marching Lumber-jacks from Humboldt State University in nearby Humboldt, CA. 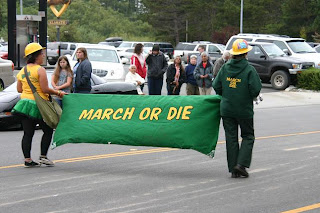 As the banner carriers passed us, their banner proclaimed the band's motto: "March or Die."

Clearly, this was a group of musicians who marched to different drummers--and different composers.

As we were watching the drum major and banner carriers, we found ouselves singing along with the band's music:

Down on the corner, out in the street,
Willy and the Poorboys are playin'
Bring a nickel, tap your feet. 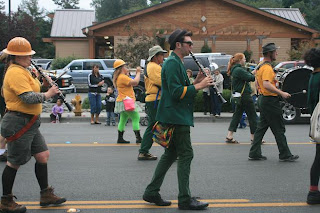 We were also struck by the non-uniform uniforms. What a hoot! 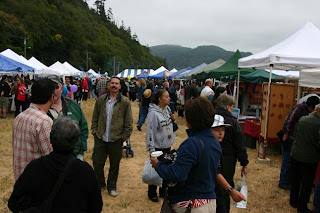 There was a good crowd at the parade and the booths. 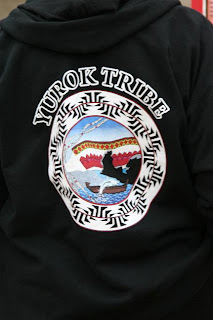 We were able to photograph one attendee's shirt which had artwork associated with the Yurok Tribe. 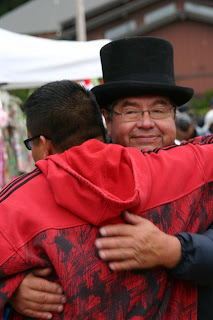 I really liked this one gentleman's hat, and by the time I positioned my camera, I was pleased to have captured his expression during this greeting. 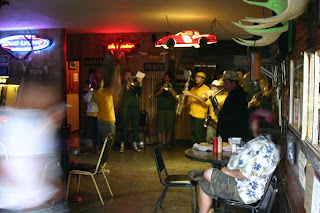 As we thought about lunch, we passed the Country Club Bar and Grill--and those Marching Lumber-jacks. Once again entertaining attendees to the Salmon Festival in Klamath, CA.
Posted by The Wanderers at 7:40 PM